Supreme Court of India on Pollution in Delhi

The Supreme Court of India minced no words to express its displeasure over lack of seriousness by government to tackle air pollution in Delhi/NCR. Most leading newspapers today (26 November 2019) have carried their outrage:

"It is better to kill them all in one go. Get explosives in 15 bags and kill them at one go. Why should people suffer all this?...Can you treat people like this and let them die due to pollution...Life isn't so cheap in India anymore. What was given [compensation] in Bhopal gas tragedy is nothing compared to what is given to victims in similar cases worldwide. The chief secretaries have no right to be in chair if they can't serve people well..." (25/11/2019)

But this is not new,  bench of Justices Arun Mishra and Deepak Gupta observed-" ...You have left people to die...Delhi is choking every year and we are not able to do anything. Question is that every year this is happening,..It cannot be done in a civilised country..It is too much. No one is safe even inside their house. It is atrocious..". (India Today, 4 November 2019),

Will eventually authorities wake up? Friends of SARCAJC feel that unless public health is taken seriously, nothing will move here. Yesterday, France24 informed of a survey conducted by a French newspaper that revealed majority supported environmental protestors. but in India there were none. A random  survey of 154 people  by Team SARCAJC reveal that majority  have accepted  polluted environment. as their fate. 97 percent felt to great extent that corrupt system is main reason for environmental pollution. Now what did they mean by this "corrupt system"?

Did you say- apart from parali (stubble) burning by farmers,other pollution causing elements often go un-noticed like garbage lies collected,garbage is burned, construction material lies on the roads, too many private cars on road, lack of public transport, unclean streets- main street is helpless, while authorities are sleeping. And all this stays with us all round the year making breathing hell. This can be witnessed even in posh colony of  DLF in upscale- Gurgaon (near Delhi). The responsibility of garbage collection, cleanliness lies with municipal Corporation of Gurgaon (to which mainstreet pays property tax). However, MCG  has subcontracted  to private Company- Eco-Green. In DLF Phase one , Eco-Green has further subcontracted to another private entity! One cant say anything to garbage collectors as they are extremely hostile.  And the net result - garbage lies uncollected, unclean streets- garbage collectors seek for extra money (read bribe tip!) . Honest, helpless residents  have complaint to MCG but in vain. Losing your life everyday with hazardous air pollution comes with helplessness  that nothing moves in Free India without corruption? Sustainable development is a lost word.

Delhi/NCR has been reeling under the spell of Acute Air Pollution after the departure  of few spell of rain & wind. Today, when Delhi saw AQI level  500-700,  Public Health Emergency has finally been declared. However, the measures declared are not really reflecting any emergency. To cite a few- Offices, colleges,factories will remain open, there is no ban on private vehicles, there is no ban on all generators, masks have not been made mandatory. Team SARCAJC did a random check of few main streets, markets in Gurgaon and found very few were wearing masks to protect themselves from air pollution- ranging from person walking on street, in cars/other transport , shopping in market.  Neither the leading TV channels nor newspapers have carried any governmental advertisements informing the main street- how to save oneself from air pollution. The life of mainstreet will decrease by almost one decade, but still no emergency has been shown by the  authorities. Not all can afford expensive air purifiers and stay indoors.  Did you ask - why pollution is never a election issue in India?  (1 November 2019)

Public Health Emergency has been declared in Delhi/NCR, thanks to air pollution reaching AQI 500- 700. This lead, the politics obsessed leading television channels turning their  focus on severe air pollution in Delhi/NCR. Times Now at Newshour (prime time debate) at 9pm with  #Delhi Bachao (save Delhi), highlighted- "Even Lahore & Dhaka are better". Republic TV on Prime Time also devoted slot on air pollution with #DelhiAirEmergency. Shivani Gupta, in her opening remarks highlighted  that no solution seems visible to tackle pollution, politicians are playing blame game. Mimansa Malik in Zee News at prime time highlighted that 11 Indian States are reeling under high air pollution and this is reducing life on an average 10 years, but the government is not doing anything concrete.  Mimansa urged  that  one should leave Delhi as air pollution is reducing your life. Rohit Sardana in Aaj Tak at 9:46pm urged that action must be taken those who cause air pollution. News Nation informed viewers about different types of masks available in Delhi. Though many cities of Haryana are also experiencing high AQI 500-700, most TV channels focused only on Delhi/NCR. At this time, every year, farmers burn parali (Stubble) in their fields. This has been blamed for air pollution. Questions emerges - Instead of blaming farmers, why no cash incentive (per Kg) was provided by State Government to farmers?  Just as government procures foodgrains from farmers at an attractive price, why cant State Governments procure parali and add on 10 years to life of main street?  (1 November 2019) 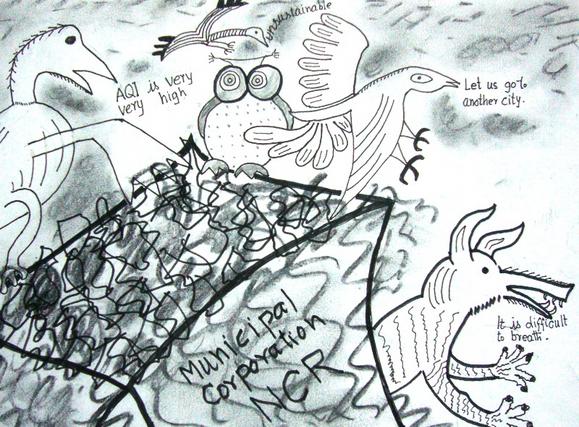 SARCAJC has been raising the problem of air pollution for long.

Air pollution has spared no-one in Indian capital- Delhi/NCR. However,  Air pollution trended when AQI level in Delhi reached over 500 and peaked over 900+. The choking city was most polluted city in the world. Now that's quite an achievement!? However, what is shocking is that authorities have not bother to initiate any drastic emergency measures. Political blame game continued/s while the main street took/takes the blunt. The apathy towards public health is simply deplorable. No advertisements by public authority has appeared informing the main street regarding precautions they can take to safeguard themselves from the negative effects of air pollution. Majority of the people carried on their lives without masks. The clash of police/lawyers, protest by JNU students took space on streets as well media time but no protest was seen to safeguard your life against air pollution.  Did you say, 9 years of your life has been stolen?  Wow, life continues anyway, hope for strong winds, heavy spell of rain!?