The British rule in India has brought in much good as well as bad. Among many ills, bribery has taken form of 'Haq' (right). Go to any office, your work will not be done until you give out fixed rate of Haq. During the days of the war this disease transformed into pandemic.

Even the Government of India was rattled. As a result it caught hold of many bribe takers and gave appropriate punishment. Remember, when administrative Report of Bengal Government was published, it proved that bribery is so extensive and has taken gigantic proportion. The alarming  bribery also attracted the attention of our local leaders, They didn't want to be seen satisfied just  by criticising bribery, profiting etc..they are showing efforts to find and curb it.  President Maulana Abdul Kalam Azad has said that officers  who have increased difficulties of people and acted with suspicious policies- will not be forgiven.
Pandit Jawaharlal Nehru also stated that high officers who have misused their rights or  who are minting money on the pretext of control, will not be forgiven. After those leaders issued such strong statements, aggrieved people starting narrating to them incidents of bribery etc. Maulana Azad has received such information and he gave an example during interview with Vartaman.

" A special firm used to import special goods and sold them in India. A bribe of Rs 60 lakhs was given to determine the price of such products, which was 6 times the price that prevailed during time of peace. Of this amount, half was taken by firm that imported, the other half has been taken by wholesale sellers. Smart government officers did not taken bribe in form of cash or in bank account, but in form of gold biscuits. So that there is no trace of this whole transaction."

Local leaders will get such countless information, but local leaders cannot be expected to collect and probe. This can be done by Public Investigative Committee. the truth is that whole lot is rotten.

The whole country is suffering from pandemic of bribery. Their suffering is to such extent that they cant even sigh. Despite determination, the government could never get rid of this pandemic. It is to be seen that when and how our patriotic  leaders will tackle this pandemic. 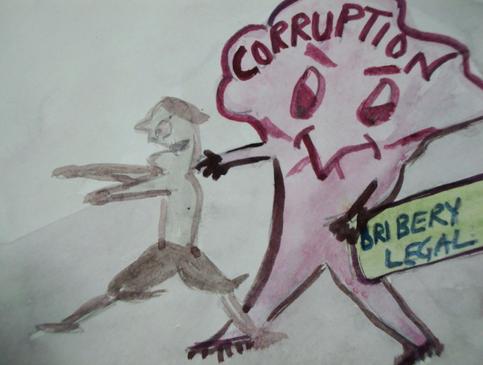