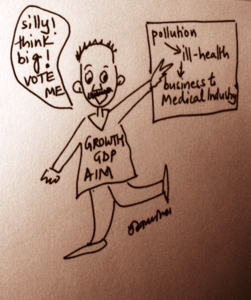 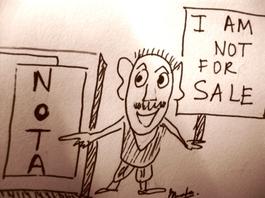 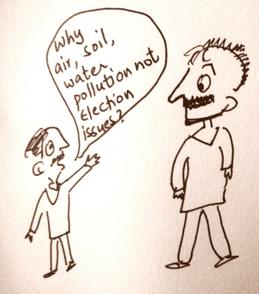 An advertisement by Office of the Chief Electoral Office, Delhi has appeared IN hindustan Times with heading in bold- “ Public Notice”  Regarding “None of the above option” (NOTA). The ad informs electors who so not wish to vote for any of the contesting candidates can exercise their right to vote by choosing “None of the above option” . That’s indeed a decision to strengthen democracy. But do NOTA really empower voters or is just a toothless option?  The next para of this advertisement informs- In case the number of votes against NOTA is more than the number of votes secured by the candidates, the candidate who has secured highest number of votes among contesting candidates shall be declared elected as per provisions of Rule 64 of the Conduct of Election Rules, 1961 read with Section 65 of the Representation of People’s Act 1951. What is the incentive for voters to come out of their house and vote? The low voter turnout is similar to NOTA? Surely, NOTA must be a more than a decorative statistical tool. The number of votes for NOTA more than the number of votes secured by the candidates reflects disillusionment of voters towards candidates. Therefore, in such situations, election of that area should be cancelled and existing candidates should be barred from contesting again and their political parties should bear the cost of conducting election. The new candidates selected by the political parties shall be more responsive to the expectations from the voters they wish to represent them in the Indian Parliament. (11 May 2019) 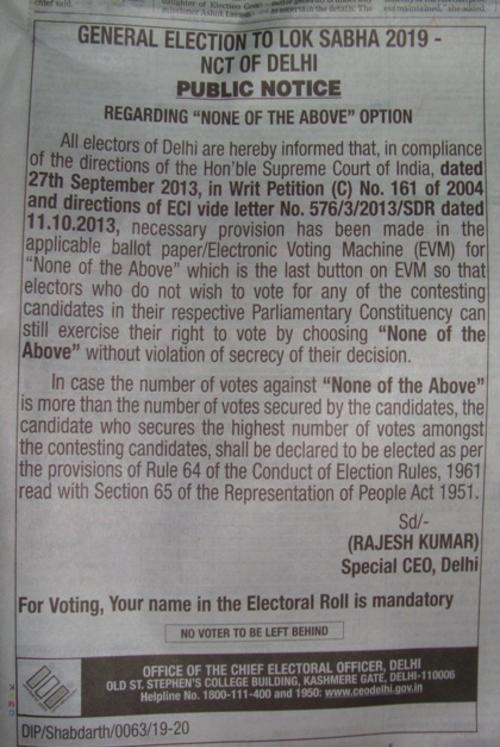 Yesterday, Election Commission of India had announced the dates for Elections. This news has been highlighted today by all newspapers. The Punjab Kesai (Panipat edition) headline- “Declaration of Election: New voter Raj” is accompanied with a large map of India along with political scene in all States. Times of India, page 8-9 inform the readers regarding present & past (present political leaders & their alignments), brief about last 16 elections, also utilizing its archives. The editorial of Dainik Jagran comes with the heading- “Festival of Democracy”. The editorial of Hindustan Times highlights-“An election that will shape India” & stresses-“The winner will have to steer the country through big transitions”. The editorial of Economic Times declares-“World’s largest Democratic exercise” but questions postponement of J&K assembly elections.

Mathrubhoomi has published cartoons on its front page with most prominence. Dainik Jagran has carried an advertisement as front page with punchline-“Every vote says something”. Hindustan also has carried an advertisement with a rather dramatic punch line- “that makes a house home, will now make governments”. This is followed in bold- “Resolution of Hindustan”. The back page lists ten resolutions for Lok Sabha Elections 2019 that in a way reflects the state of journalism in India- “ We will not publish news (paid news) by taking money, News and Advertisements are lifeline of newspapers, we shall not indulge in any unethical compromise, We will public Advertisements as Advertisements and news as news”. An Advertisement by Officer of chief Electoral officer, Delhi comes as “Public Notice” informing restriction on printing of pamphlets, posters by candidates/political parties/ printing press etc. Next to this Advertisement is another advertisement by Officer of chief Electoral officer, Delhi. This ad informs about mandatory requirement of getting certification by media certification & monitoring committee before publication of political advertisements to be telecast/broadcast over TV/Radio channels/audio-video displays/cinema halls/internet based media/website including social media & cable network. However, these advertisements do not spell out penal action if the directions are not followed. (11 March 2019)