Apart from freedom from Colonial British rule, 15 August 1947 brought in problems with responsibilities for Indians. Desi journalists, while rejoicing the importance of the day, echoed fear and anguish of the common man in the ears of the nation builders (read government). Yes, the desi Indian PRESS was finally Free to perform its duty and it did, rather well. 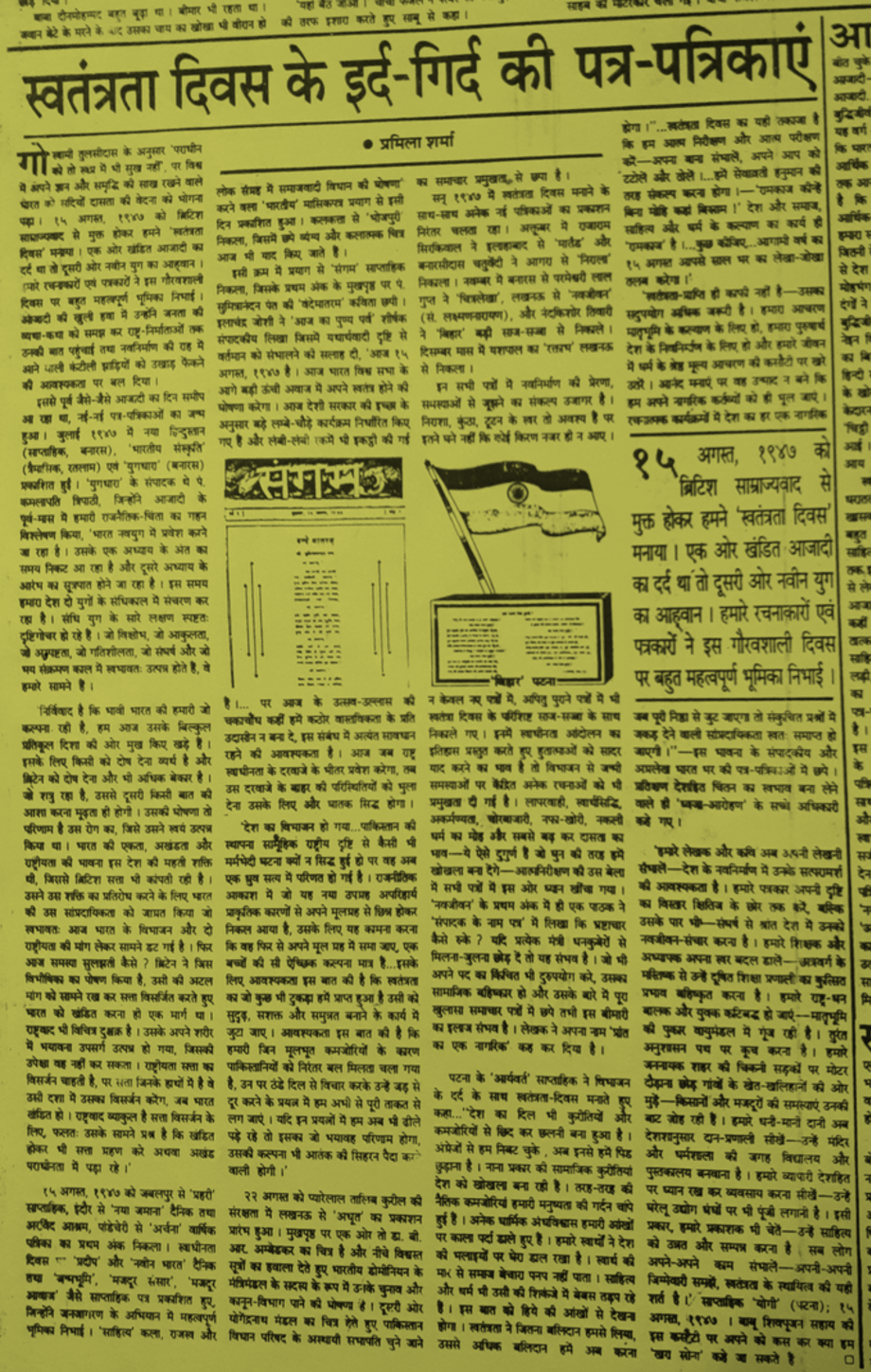 According to Goswami Tulsidas- “Enslaved cannot get happiness even in dreams"

In area of knowledge and prosperity, India held a high rank in the world, but had to bear the pain of being enslaved for years altogether. On 15 August 1947, we celebrated Indian Independence day- freedom from British colonial rule. With the pain of divided freedom, it was a beginning of a new era. Our creative authors and journalists played an important role on this glorious day. In free air, they echoed the fear and anguish of the common man in the ears of the nation builders. They stressed the need to uproot the thorny bushes that hindered the path of building new India.

The editor of Yugdharma was Pt. Kamlapati Tripathi, a month before independence, undertook deep analysis of political thought-

“India will soon enter Navyug (new era) . One chapter will end and another will begin. This moment, our country is existing amidst the overlap of two Yugs. The signs of this transitional period are clearly visible, which are result of disturbance, anxiety, non clarity, movement, struggle, infectious fear. Beyond doubt, unlike the India we imagined, today, we are on the opposite side. It is useless to blame anyone, and to blame Britain is even more useless. Britain has been our enemy, to expect anything else from them is simply stupidity…The British rule has always been afraid of Indian unity, sovereignty and nationalism. To counter this shakti, communalism was flared up in India, which  led to partition and formation of two nations. The how can this problem be solved?...”

"Today is 15 August 1947. India will declare in loud voice its independence in the global forum…but today in this celebration, we must guard against becoming indifferent to the hard realities. Today, the country will enter through the door of freedom but to forget the circumstances prevailing inside this door will be a disaster. The country has been partitioned….we need to work to make whatever piece of independence that we have received – strong, stable and developed. Carelessness, self serving, laziness, black marketing , profiting, enchantment to false religion and worst of all- slave mentality- these are ills that can make us hollow..”.In the first issue of Navjeevan, a reader wrote to the editor and asked- how corruption will end.

“Country’s heart has become sieve due to ills and weaknesses. We have tackled the British, now we have to get rid of these. All kinds of social ills are making the country hollow.….Our greed has overpowered the good in our country. Due to this greed our society is not able to develop. Literature and religion are also hit by the same.…Now we need to make more sacrifices then we made for our independence. In order to celebrate Independence day in true sense, we should do self introspection and self examination-.….Merely  getting freedom is not enough- its good use is more important…. Sure celebrate, but in this frenzy we should not forget citizen’s duties.”

“..Our writers and poets should not pick up their pens. The new development of the country needs their consultations. Our journalists should focus on the horizon as beyond – need to give a new life to the people exhausted by life struggle. Our teachers and lecturers should change their voice,- they need to drive out the ill effects of polluted education policy…Our leaders should leave the shiny roads of city & turn to farms in villages- the problem of farmers and labours are waiting for them. Our rich, known and philanthropist should learn to donate according to the need of the nation. They need to built schools and libraries instead of temples. Our businessmen should do business- while keeping in mind country’s interest- they should invest in domestic local businesses. Similarly, our publishers must also awaken- they should make literature prosperous and well developed. All people should concentrate in their work- should realize their responsibilities- this is the only requirement of strong establishment of independence.” (Yogi, 15 August 1947 Weekly. Patna).

Now let us see whether on above criteria set up by Bahu Shivpujan Sahay (in Yogi), we can proclaim ourselves –“Pure old”?