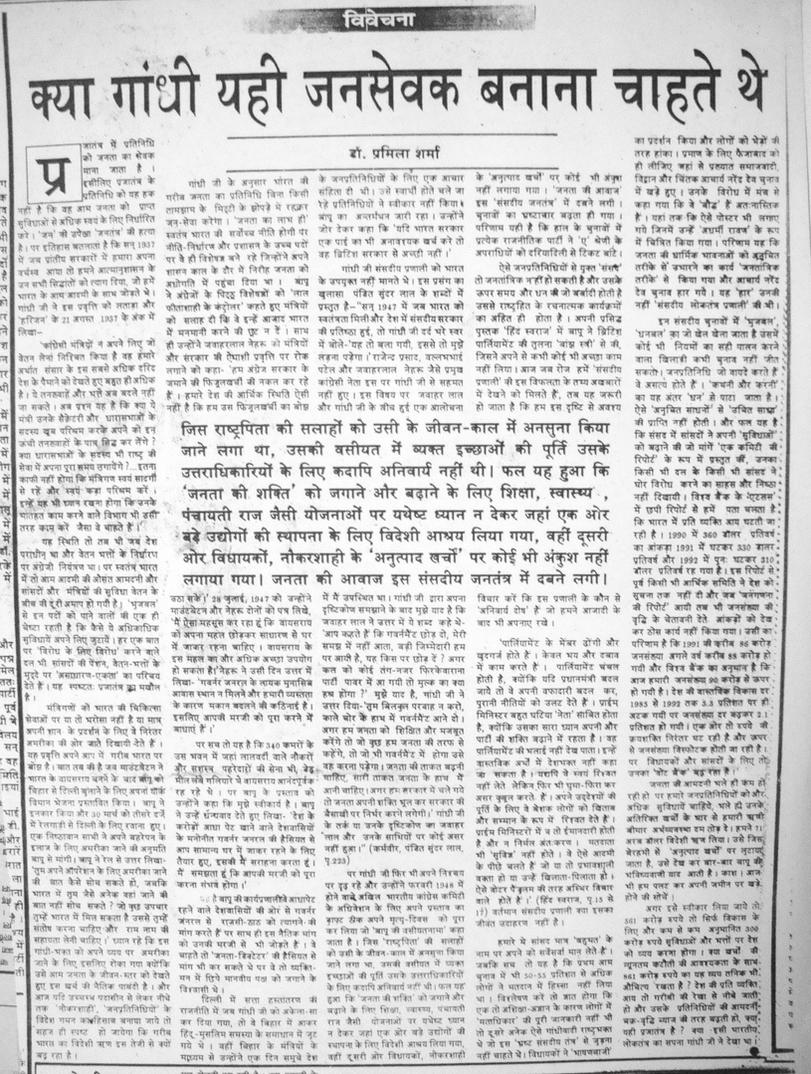 Mahatma Gandhi wrote quoting from a letter, “Congress today is falling down. Everybody in it wants to become an MLA, and those who succeed in getting elected do not work for the country, but for themselves alone. An MLA gets a sizable salary which is quite adequate for more than his necessities. But, the correspondent (Mr. Koda Vekatappayya) says MLAs are corrupt, they harasses civil servants, and they try to browbeat them into doing their bidding. In this way both suffer- the civil servants, as well those who call themselves the people’s representatives. “The rot is spreading among us. The more the people we return to the legislative assemblies, the greater the amount there is of filth. My correspondent suggests that we should reduce the number of MLAs because, in any case, they do not represent the people, and go into the assemblies only to serve their own self interest. “The MLAs also feel self important and talk about capturing the whole of India. But who will control India? Let us not say that India is ours, rather let us say that we belong to India. If we make India our own, we must do so, not to further own self interest and to enrich our relatives, but to serve our motherland”.
Hindu. 12 January 1948.
From the pages of The Hindu, Mahatma Gandhi : The last 200 Days.

On 23 January 1948, Mahatma Gandhi “deplored the tendency among Congressman and others to seek offices and high emoluments, which were wholly out of keeping with the state of the country and with the kind of services they were bound to render to the people. Mother India could not be served in that manner. The rulers and ruled all had to undergo selfless service so that India could erect before the whole world and hold the moral heights that would benefit all humanity. As Bapu wanted India to rule high by moral example and contribute to the comity of nations…” Hindu (23 January 1948). From the pages of The Hindu, Mahatma Gandhi : The last 200 Days.

A must to read- “Did Gandhi wanted to make such kind of public representatives”. This article was written down by SARCAJC’s President- Prof Pramila Sharma in Rashtriya Sahara, a newspaper in Hindi, way back, 18 September 1994 . She highlights that “….advice by Mahatma Gandhi was ignored even during his lifetime. The wishes expressed by Mahatma Gandhi in his will was not compulsory for heirs. There was need to concentrate on education, health and panchayati Raj  to awake and increase the ‘power of masses”. However, instead, the result was- establishment of big industries relying on foreign support, and no curb on unproductive expenditure by public representatives and bureaucracy. The power of masses was getting suppressed….”