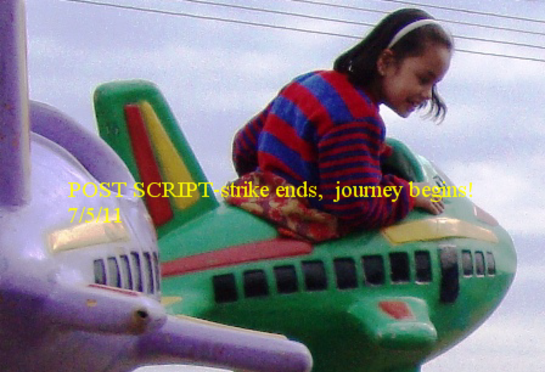 Break Ice: The deadlock of Air India continues unabated.  Most newspapers report the stalemate but there is no light- why is it taking so long to end strike by pilots?

Employees and the management are usually seen to have diametrically opposite interests. This is the resultant of a belief held by the managers that worker cooperation is irrelevant or impossible to achieve. In other words “Us & Them” strongly persists. This notion naturally tends to persist in the minds of the employees which give rise to prevalence of distrust between the employer and the employees. Ideally the management should aim at beyond compliance and towards long term cooperation with the employees if they wish to extract the maximum out of the employees. In this regard, it is extremely important for the management to initiate steps towards establishment of “new industrial relations climate” not only to make the desired transformation change a success but also to improve the performance of the organization.

The Japanese have to an extend pioneered the capitalistic mode of worker participation; to the West , the human resource management policies of the Japanese have in fact played a major part in their remarkable success in the world. Though fulfilling the above mentioned preconditions might  take some time , it is extremely important  that the management does initiate some of them if not all in one go in order to give the workers a clear positive signal of sincerity , which is hoped would break the prevailing negative cognitive scripts in Air India.

The employees might just resent any change due to the prevailing climate of distrust. The best way in this regard would be a shared learning kind of approach. The principle of this kind of action oriented strategy of change is joint ownership of the change process. This approach would go with the view that organizations are in fact political systems. Unlike the classical management theory which views organizations as rational unitary entities dedicated to the goal of profit maximization, this approach would like Cyest & March, view organizations as political arenas. Therefore before initiating any change in an organization, it is extremely important to undertake a minute political analysis .The core issues in a political analysis of organizations & organizational change would be:

Who are the parties involved?
What are their interests?
How much power do they have?
What is the base of power?

How much power might be used in the pursuit of each party’s interest?

When the process gets over, who gets what?
What would be the impact of the outcome on the relationship between various parties that are involved? ( in the short as well as the long run)

In Air India, adversarial industrial relations climate tend to exist and the power of the unions is tremendous. Therefore a shared learning approach seems to be the most appropriate in this regard. Is anyone listening?

Noted journalist Tavleen Singh’s weekly column in Indian Express had shouted on 1 May 2011- “Sell Air India and move toward”. It could be her view, but she has overstepped the line-“…there is a national consensus that it is time that Air India was either closed down or sold..”.The claim of national consensus is an empty plate, where is the meat (read national consensus survey)? Surprisingly, then she goes on to praise private Indian airlines in extreme- “…Private airlines in India are today among the best in the world and even recent hard times, have managed not just to survive but to thrive…”. Again, she has overstepped the line of reality. The whole Indian aviation sector had been in bad shape. Estimates suggested the cumulative debt of whole Indian airline industry to be about Rs. 600 billion (before debt restructuring suggested by RBI). Kingfisher Airline, private sector, controversial airlines which carries surrogate name of liquor brand got rid of Rs. 80 billion debt at the end of last year, thanks to debt recast cleared by apex bank-RBI. Earlier last month, two leading banks picked by about 11% stake in Kingfisher at Rs. 64.48 per share. Check out National Stock Exchange of India, the share value has dipped to Rs. 43.90! Now, can one blame private ownership for this slide? But  why should banks bail out ailing private sector sick company and agree for a stake in it? Instead, why not liquidate and get your share- survival of fittest?

The ownership of an organization per se has nothing to do with its efficiency. There are certain other attributes or characteristics that make an organization, in Peters and Waterman‘s term -- an “excellent organization”. It would be worth to note that even after privatization of any public sector organization, there would be a need to restructure them so as to improve their performance. If the management of Air India has failed to efficiently restructure, then it does not make Air India – ‘wretched’ (in words of Tavleen Singh).  And on the other hand, the government has failed to understand the importance of restructuring and instead has been doling out money.

Unfortunately the well-wishers of the public sector often tend to view privatization and government owned public sector on two extreme ends which former represents-efficiency and latter- loss. The basic problem is related to change -- getting here to there. In an airline?