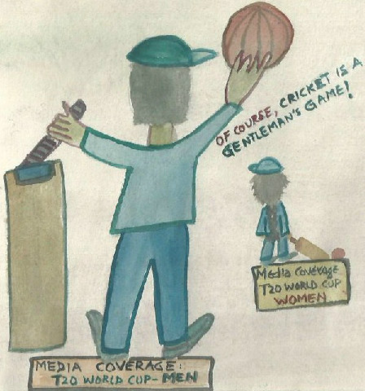 The neglect of women hockey by authorities was shown in blockbuster Hindi movie- Chek De India. Is this apathy spread in sports? Some  might argue it was just a movie, and women in India are empowered. Is this women empowerment in sports reflected even by leading Indian newspapers? Take a clue from cricket- men & women are playing World Cup T20 in India. Of the scanned 16 newspapers, only one newspaper- Indian Express has carried an editorial on women cricketers- “The other World Cup”  and mentions- “..No one loves women’s cricket, it seems. Many aren’t even aware that such a thing as the women’s world T20 exists and is being held simultaneously with the men’s game. It will take time for perceptions to change…The perceptions are changing, albeit slowly, and if Mithali’s women can perform in eye catching ways, the game’s profile will take a leap”. So, has this newspaper highlighted victory of Mithali’s women’s win in the first match on first page? Nope, further on the sports page, 24 page, the highlight is- “India make their own debacle” covering majority of space, leaving leftover space for -”Harmanpreet steps out of Mithali’s shadow, sets up a massive win”.