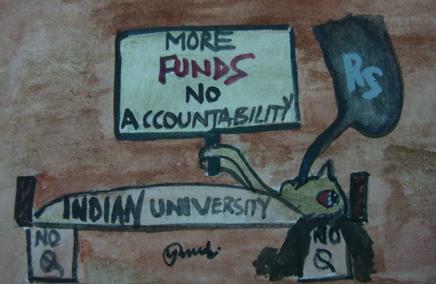 You knew honest main street is still resisting the corruption rot that stings in various forms. The front page of Mail Today shouts –"Heartless DU leaves ageing Prof Starving". Neeru Chandra informs that Tara Balgopal, a retired Prof from Delhi University is living in desperate poverty because the university has not paid her retirement dues for the past 15 years. Reason-university has lost her files/records! This is all not just a mere case of losing record but a battle where Prof Tara is fighting out corruption- all alone. Wonder why the active teachers association of Delhi University- DUTA did not take Prof Tara’s case and held University officials accountability for lapse? A friend of SARCAJC points that DUTA has no real interest in plight of retired teachers as they don’t vote in their elections. Oh! Vote bank politics, here too? Neeru has not bothered to catch up with officials of DUTA on this. Prof. Tara approached the high court for her dues, but even there the court case is still dragging on. The statements made by university and college officials to the Neeru that have been published in Mail Today, seem to be more of expression of pity on Prof Tara’s state rather than deep regret on non-implementation of laid out pension rules. The fundamental question arises is why and how Prof’s records went missing from Delhi University? Did the University lodge FIR for the missing records? According to rules, the head of the institution is responsible for maintenance of records, was the Vice Chancellor of Delhi University held accountability and punished for losing records? Neeru has not bothered to ask these pertinent questions to the Delhi University officials. Further, is this kind of ill-treatment to retired professor a result of professional jealously, given the fact Prof Tara belongs to hall of fame and was loved by her students that included Hema Malini? Unfortunately, Neeru Chandra has neither bothered to check this out nor reported that pension rules followed by Delhi University have not been implemented in her case. Given the fact records went missing and final pension & retirement benefits could not be given on date of her retirement, Delhi University should have immediately sanctioned provisional pension & gratuity (based on whatever record was available – with her or anywhere else)- on the day of her retirement. Moreover, there the High Court should have ordered the payment of provisional retirement benefits on the first hearing of the case rather dragging it for the last ten years that has eaten away all her resources. Is this an ideal manner to treat a retired professor? A friend of SARCAJC points out that this is not the first time Delhi University has behaved in this unprofessional manner- in response to RTI, Delhi University refused to provide information on the pretext- missing/not traceable! This is not all, Mr. Shailesh Gandhi, Information Commissioner at CIC, simply closed the case and did not make even one adversarial remark, forget asking Delhi University to file a FIR for the missing record! But when he was shown decision of another Information Commissioner at CIC who went tough on those who did not provide information due to losing official record, Shailesh, for reasons best know to him, did not pay any heed, not surprising- the official representing the Delhi University was seen smiling. A friend of SARCAJC points Delhi University does not  bother to fully implement decision of Directorate of Public Grievance (DPG), while DPG simply closes the case! Ambika Pandit reports in Times of India that hospitals in Delhi are charging slum dwellers up to Rs. 500 for ‘free’ birth certificates. And you know why? All this is reflection of dismal state of public grievance system, is anyone listening?