The newspapers are flooded with State election results. Of the 22 newspapers scanned, maximum pages (8 pages) devoted to individual election results with photos, is by Dinakaran, newspaper in Tamil (total pages- 12). In the area of cartoons, Economic Times's toons stand out. While the newspapers in English and Hindi in the capital carry self explanatory headlines, which one is most creative, you decide from the following:

How different are editions of a newspaper in New Delhi and Election State, say West Bengal? Let's look at Statesman, that highlights role of journalism on its masthead- “People’s parliament, always in session”.  It's Kolkota edition carries on front page, a full page advertisement by winning Trinamool Congress with smiling photo of Chief Minister of West Bengal- Mamta Banerjee. The punch line reads - “The people have spoken development has been chosen”. Move on, paper’s headline read in bold-“Mamta back” on background picture of green colored hands! The same is repeated in  Siliguri edition, Bhubaneswar edition. However, Delhi edition’s headline reads-”Debut, comeback, debacle” but does not carry any advertisement of any political party.

The assembly results are now out in the open and newspapers are in a celebration mode for vibrant democracy! The Free Press Journal feels that Indian voter has proved to be more political consciousness per calorie than anybody else in the world and have voted against corruption. What about others? Take a clue from headlines, cartoons and editorials from a few newspapers from capital:

Caricatures are raining in many newspapers on two women winners! The victory of Mamata Banerjee is indeed special and this can be seen from the cartoon drawn by no other than renowned artist- M.F Hussain. The toon depicts Mamata as ‘Shakti” with pigeon in her hand and a tiger at her feet- “Essence of Indian Womenhood is SHAKTI”. Yes, Hindustan Times has indeed managed a scoop for publishing this HT Exclusive toon. The paper decided to carry it on page 4 and not on page one, surely it undermines importance of HT Exclusive.

The toon in Asian Age shows Mamata & Jaya standing on podium number one, while on left & right, are the graves of DMK & Left Front! The two part toon in Hindu shows the difference in the election victories of Mamata & Jaya! To know how Mamata demolished the fortress of Left, check out the toon in Rashtriya Sahara. The cartoon in Hindustan Times is more direct; it shows CM being crushed under Mamata’s rubber slippers!

The cartoon in Rajasthan Patrika shows the symbol of Left being thrown out of Writer’s building by two hands belonging to a woman. And you know who she might be! The toon in Amar Ujala features Mamata’s hand firing a majority bullet at surprised looking leader of the Left. The pistol is in shape of symbol of the Left! The head of Left Government is chopped off in toon in Jansatta, but by whom? The left government is holding the symbol marred with blood.  In the large cartoon in Dainik Bhaskar, Mamata is racing ahead, while Left is stranded on mile-stone of 34 years. A small child (holding Kerala verdict) tells defeated leaders sitting in trash can- “voters can finish you or worse, photo-finish you”. The toon on front page of Punjab Kesari shows probable draft press statement being narrated to a Left leader- “..the positive aspect of election result is that like this time voter has happily given us a new duty...to sit in opposition!”.

What is the bottom line of these election results? Well, the edit of Mail Today feels –“...at the end of the day, the elections were about personalities (Mail Today), Left’s defeat epic, breather for Cong (Asian Age). Streamroller victories: Mamata, Jaya, Gogoi firmly in driver’s seat (Tribune. The editorial in Navbharat Times has focused on the implication these election results on the ruling Central Government. The editorial of Indian express is spot on-“Voters have also shown they have little patience for also-rans and they are deeply aware of the value of their ballot. There has been in this verdict absolute disdain for anyone who would trivialise what they see as their core concerns – that is something we must celebrate”.  The editorial of Times of India points the message from Indian voter –“ he will no longer be taken for granted”. The tone of editorial of Dainik Jagran  is  similar- “..now masses are not ready to tolerate any form of mismanagement...”So does editorial of Hindustan, Aaj Samaj, Nai Duniya. However the editorial of Hindus starts off- “No one explanatory framework could have held together the 2011 assembly elections in four states and one union territory. The issues were different, as were the personalities..”. The editorial of Hindustan Times feels “if there is any lesson from the 2011 polls, it is the arrival of regional satraps on the national stage”. However the editorial of Amar Ujala cautions- “..Repeatedly in elections, the lessening of relevance of national parties and rise of regional trends in setting national agenda is not a positive sign”. Jansatta, the newspaper known for its Left orientation echoes– “..it is wrong to say that days of  Left government are over..”. The edit of Navbharat Times feels the need for introspection for the Left.

The most comprehensive four lines on election result were not carried by any editorial but front page of Times of India - “Almost one-third of Indians will now be ruled by women. With Mamata Banerjee and J Jayalalithaa storming to power on Friday in West Bengal and Tamil Nadu, they join two other women chief ministers, Mayawati and Sheila Dikshit, to administer 368 million, or around 30% of India’s 1.2 billion population. But the day didn’t belong to just women. It belonged to the wise Indian voter who punished the corrupt and the arrogant with ferocious intent...”.


19 April 2011
Hindustan Times on its front page informed in brief that the voter turnout in West Bengal in frist round was 84% which –“surpassed Assam. Kerala and Tamil Nadu...”. But there seems to be no consensus on exact voter turnout in first round of polls in West Bengal. Take a clue from few newspapers:
Nearly 80% vote in 1st phase of Bengal polls (Asian Age)
W. Bengal: 74% vote during first phase (Rashtriya Sahara)
75% voting in first phase (Nai Duniya)


15 April 2011
The high voter turnout in the three States- Tamil Nadu (78%), Kerala (75%), Assam (76%) is good news for health of democracy, But there is more to these statistics.The editorial of Hindu notes-" ...the 2011 elections will be remembered for the widespread, systematic distribution of cash as inducement to voters..". It appears that revelations by India cable of Wikileaks regarding buying of votes was not a big deal.  Correspondents of  Hindustan Times ask front page -" Anna effect or just greed, what pushed voters?". Do you know the answer?

The cartoon on front page of Assam Tribune features two men comfortably sitting on a sofa. Larger one (probably a politician) tells the other-“According to astrological forecast my position is safe, however the media does not seem to favour me”. With exit polls banned, the media forecast becomes even more unpredictable? Hang on; will the long list of promise of freebies by political parties impress the voters in Tamil Nadu? Nope, N. Ravikumar informs that freebies like grinders, laptops for students, four gram of gold for mangalsutra, fan, free land, house, etc have failed to impress the electorate. Therefore, the two rival parties DMK & AIADMK have stopped focusing on them in the campaign for the April 13 elections. The strength of democracy lies in the fact – “..people across the state seem more anxious this time about roads, bridge, drainage and drinking water”. A friend of SARCAJC argues that promising freebies is an attempt to buy votes and election commission of India should take action against such freebies. But not all consider freebies a menace.  In an interview to Bhagwan Singh, the son of Union Home Minister feels that freebies is not bad economics. Take a clue- “We must not confuse populist measures as bad economics. Distribution of wealth and services in an accelerated manner though populist schemes has its benefits...” (Asian Age). In the coverage of election campaign in Bengal, it appears who covers more ground on foot is matter of competition among two main leaders. While the front page of Hindu informs that campaign ends for the final phase of Assam polls, other leading papers have hardly concentrated on the mood of the electorate and the issues now. Point to ponder- why?

The front page cartoon in Assam Tribune features a poor woman sitting in front of a hut, a man is seen bringing gifts in his hand. The woman comments-“The way we are loaded with gifts, I wish we had elections every year”. In the same paper, Dwaipayan ponders about accountability in present democracy-“...the problem of the electorate here is that they can exercise their sovereign powers over their leaders only during elections, not after elections. That means once they choose or vote/parties to power, they cannot unseat their members or ask them to step down even if they prove unworthy of a government..Assam badly needs to tackle many pressing problems including unemployment, fold, erosion etc. But if it is a multi-party combine, there remains a doubt if it will be a corruption-free, stable government because the ruling constituents will hardly have consensus on policy matters...”. Taking of consensus, there appears to be no consensus on voter turn-out in first phase of election in Assam, take a clue from a few newspapers:
75% voter turnout (DNA, Financial Chronicle, Aaj Samaj, Hindustan Times)
67% voter turnout (Times of India, Free Press Journal, Dainik Jagran, Assam Tribune)
66% voter turnout (Hindu, Asian Age), 65% voter turnout  (Amar Ujala)

State elections in Five States just around the corner, the leading newspapers in the capital seem to have not given it a priority. In fact a few have totally ignored! According to Free Press Journal, corruption and quality of governance are major campaign themes in the States going to the polls, but it is more evident in Tamil Nadu.  Don't forget this is the  State where political parties are promising freebies  to lure voters. The elections  & money, take a clue from an advertisement that has appeared in classified section of a leading newspaper. Is this ad, Fake or dubious or genuine, you decide:
Invest Rs. 1,00,000 or more in Election Fund & earn 20% P.A.... 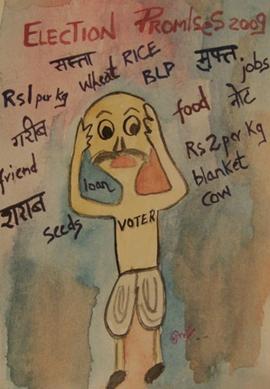