Today (23/11/18), an advertisement by Indian Railways has appeared in Hindustan Times with a punch line-“Don’t take the danger route, Never sit it walk on the railway tracks”. 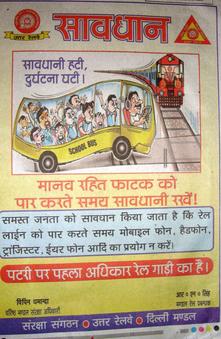 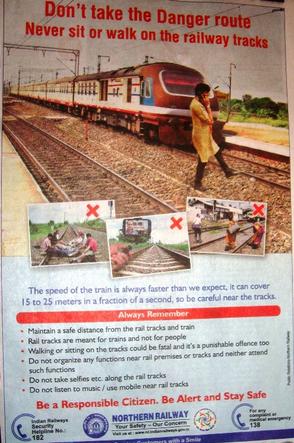 Hindustan Times, today informs, Chief Commissioner of Railway Safety (CCRS) SK Pathak has given a clean chit to railways for accident that took place on 19 October. Hundreds of people had stood on a railway track to attend a festival /function, ignoring the income train that led to death of 61 - “ ..the reason for the accident is negligence of persons reportedly standing on and near the railway tracks witnessing Dusshera Mela at Dhobi Ghat.” The inquiry report recommended that the “Government Railway Police (GRP) and Railway Protection Force (RPF) should hold regular meetings with state police and get updates on all such events where large gathering is expected near track and railway should proactively impose caution/speed restriction at such locations/sections.”

Hopefully, more frequent advertisements featuring cartoons for citizen safety will appear for welfare of all