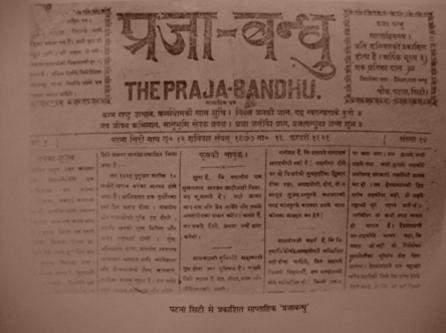 The year 1920 saw the birth of “Praja-Bandhu”, a weekly from Patna. The paper, advocating nationalism, was blessed by Dr Rajendra Prasad, who later became the first President of Free India.

This pro-Gandhi paper supported non-cooperation movement and therefore was an object of frequent government raids. Due to government action against this paper, people were scared of openly giving financial assistance to this paper.

Jeevanand Sharma, the editor of this newspaper found a way out. He was a good orator and scholar of Sanskrit, Hindi and English. During night, in a vacant ground, he started narrating Mahabharata in a lucid manner. This attracted a lot of listeners & after end of each narration, Aarti took place in which people contributed money. After all, how could government object to this age old religious practice? In the morning, Jeevanand, utilised this money and took out “Praja-Bandhu”. Further, during narration of Mahabharata, he grabbed opportunity to discuss patriotism, national pride and Swaraj.

This way, he fulfilled the aim of being a committed editor-publisher! He has indeed made serious contribution to Indian Independence and established high values of journalism.