..it has been truly said by economists themselves that statistics can be made to prove two contradictory propositions. It is therefore necessary for a prudent man who is not concerned with merely proving a preconceived proposition but who is concerned with merely proving the truth to probe beneath statistics and test independently every proposition deducted from them. It is no doubt good to know the average depth of a river but a non-swimmer who is on learning that its average depth is below his height attempts to ford it is likely to find a watery grave. Even so will a man lose reputation for sanity who relies upon the mirage of statistics dressed up for him. Just as a man who would ford a river must know its highest and its lowest depth, even so should a man desirous to make a valid use of statistics abstracts have access to the underlying figures and know how to handle them. But the average man has neither the time nor the ability to study bewildering figures. For him the real test is the experience of the village like if he would know the condition of real India. Such experience cannot be belied by any statistical jugglery... Go to the villages and you will find misery and despair written in the faces of the inhabitants. Both they and their cattle is underfed:  mortality is on the increase, they have no resisting power when disease overtakes them...Their illiteracy is of anything on the increase. These are no signs of growing prosperity...(Mahatma Gandhi. Young India. March 28, 1929) 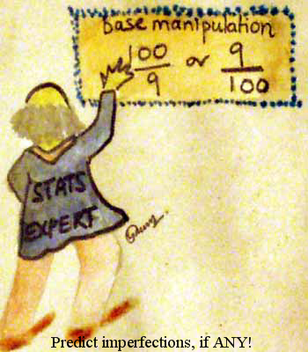