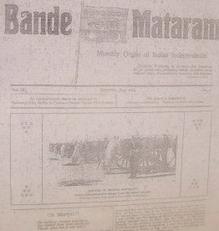 To most Indians, the Great Revolt of 1857 is the First War of Independence. Scanned 24 newspapers on 10th May 2009, but could not find any news report or advertisement on Uprising of 1857.

In year 1915, Madame Cama’s ‘monthly Organ of Indian Independence’ carried image of ‘Victims of British Brutality’ along with a long write-up entitled- “Oh Martyrs” on the front page. Take a look at its extracts-

“The battle of freedom once begun

And handed down from sire to son

Though often lost is ever won!!


To-day is the 10th of May! It was on this day that, in the ever memorable year of 1857, the first campaign of the war of independence was opened by you, oh martyrs, on the battlefield of India. The Motherland, awakened to the sense of her degrading slavery, unsheathed her sword, burst forth the shackles and stuck the first blow for her liberty and for her honour. It was on this day that the war cry Maro Firungee Ko was raised by the throats of thousands, it was on this day that sepoys of Meerut having risen in a terrible uprising marched down Delhi, saw the water of the Jamuna glittering in the sunshine…..(Bande Mataram. May 1912)

Anniversary celebrations of 1857 became a annual affair by the revolutionaries. Take a look at the following invitation letter which was printed in red ink:

The British celebrated the anniversary of 1857 in London by staging the attack on Kashmere Gate in Delhi during the Naval & military tournaments in May 1907. On the other hand, the Indian revolutionaries republished Dr. Congreve’s pamphlet on India. A letter written by Hugh O’Donnell, the Vice President of the Irish National Confederation was published and distributed under the title of ‘A Triple Reparation’. Take a look:

“As the jubilee of the sad and memorable events of 1857 is now at hand, it occurs to me that the great movement of commemoration and reparation in India should focus itself so to speak in three principle sentences, all intimately connected with the most tragic events of that tragic time. The most enlightened Englishmen, even soldiers like Field Marshal Lord Roberts, are now united in recognizing the terrible nature of the outrage offered to the gallant Indian army, when scores of honorable men, both Hindus and Musalmans were forced to choose between religious pollution worse that the death and obedience to a government that had broken the solemn pledges of impartial justice and religious in toleration. The scene of first service reparation should naturally be those arsenals at Dum Dum where low castemen were employed to manufacture the polluted cartridges that were to dishounour and degrade hundreds of thousands of brave and gallant soldiers. The second service reparation should be most naturally be held at Meerut, the site of the cantonment of the splendid Third Cavalry, who were forced into insurrection by the sight of their bravest comrade being taken away, chained and fettered, to penal servitude for no cause except to defense of his nationality and religion. I would suggest that a third service of reparation could not be better held than at Delhi on the scene of the murders of the young prices of the Imperial house, who though prisoners were butchered on cold blood by the ruffian Hodson of Hodson’s horse”.