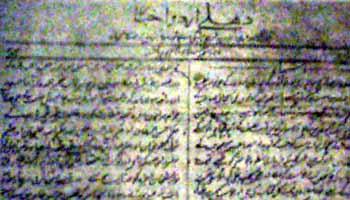 Dehli-Urdu-Akhbar, a newspaper from Delhi started its journey in 1836 & was  renamed Akhbar-Al-Zafar on  12 July 1857. Its last issue came out on 13th September 1857 and its editor - Maulvi Muhammad Baqar died a  Martyr’s death.

The influence of native newspapers was far-reaching in 1857, evident from the observation of Rev. J Lang in 1857:

“The native newspapers are humble in appearance, yet like the ballads of a nation they often act where the law fail, and as straws on a current they show its direction”.

The revolt of 1857 was not sporadic and was well planned. This can be read in the native newspapers of those times, evident from the observations of Rev. J Lang in 1859:

“The opinion of the native Press may often be regarded as the safety valve which gives warning of danger ; thus had the Delhi Native Newspapers of January 1857 been consulted by Europeans functionaries, they would have seen in them how the natives were rift for revolt, and expecting aid from Persia and Russia.” 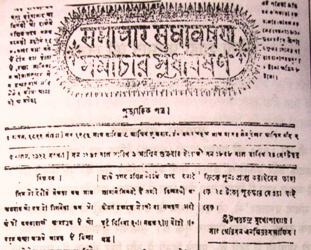 The feeling of injustice among the Indians with the politics of East India Company is clearly visible from the native newspapers. Take a look:

Our Governor General, Lord Dalhousie Bahadur has annexed Nagpur and looted all ornaments and treasures of Raj Ranis and placed them in treasury of Calcutta city. Employees of Hamilton Company will place advertisement in newspaper to inform all about auction time. One more special news is being heard that Ranis of Raja of Nagpur will be shifted to a very small place in remote area. The royal place will be emptied and permission will be granted to Commissioner sahib to live in this place. We are not sure if this news is true or not. But is it is true, injustice, atrocity and violence on native Rajas has reached its limit. After looting money. Jewels, cloths, shed has not been spared- what more oppression can be done? The widow of Raja are being tortured. Is this just? Now all people will say that these people are big tyrants and oppressors. We are surprised to hear that English are compassionate towards women & don’t harm them, but for so many days English compassion has not come into light. By grace of God, now compassion is shining in India & Europe. But our Governor General Dalhousie is big honorable, knowledgeable, reputed, compassionate and beneficent. He started the cruelty on Ranis of Nagpur, it can’t be said on whose orders it was done. If the Court of Directors from abroad gave this order, what can Lord Bahadur do or his nature has changed.


The newspapers from Bombay city have informed that similar to Pindari people who used to loot rich people, now-a-days our Governor General Bahadur, born in London, came to India to loot assets from bother-like independent Rajas. It is not right on part of the newspaper to write such harsh words against the Governor General Bahadur. We are very sad after hearing but what can we do, we are helpless. It is sin to hear criticism of ruler. But may it be Raja or subjects, both will get praise according to their deeds, this way even God is helpless. In criticizing low people even the reputation of supervisors get diminished.


...Capital Delhi was snatched, took Lucknow in no time
Peshwa was imprisoned in Bitoor, Nagpur too was attacked
Udaipur,Tanjor,Satara, Karnatak could not stand
As Sind, Punjab, Brahma recently faced thunderbolt....

...Ranis sobbed in palaces, Begum was deep into sadness
Their jewels, clothes were selling in Calcutta Bazaar.
Openly the English newspapers were publishing auction notice
“Take jewels of Nagpur, NauLakh Necklace from Lucknow
This way, respect of veil was sold by foreigner...