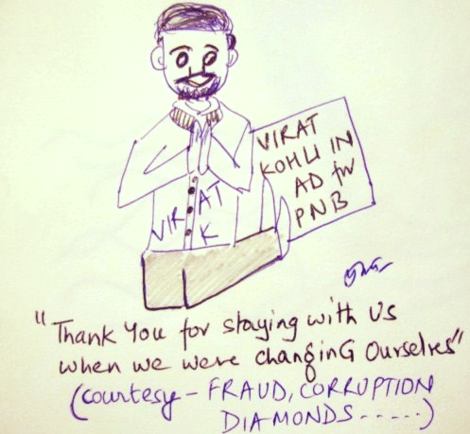 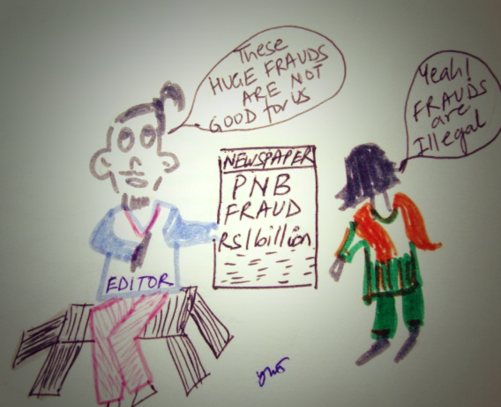 17 February 2018
Newspaper of the Day on PNB Loot:
Most newspapers are carrying details of the government action of raids, passport suspension, post hue & cry over Nirav Modi Scam,  which is over a billion rupee. Dainik Bhaskar stand out today for its large colored cartoon on page 12, where a seeming retired bank officer in formal rags is frying pakora, behind is the logo and board of PNB. He is seem telling a small boy & man (looking surprised) - “PNB.. Meaning pakore naram banege (pakoras will be soft”. The editorial of the day has been penned down by Kalpesh Yagnik,  the  Group editor of by Dainik Bhaskar which has appeared with heading-“Nirav Modi has looted- who will imprison those who allowed him to loot? “. Kalpesh has informed the readers in details of the mess and has not minced words . Kalpesh questioned why for such a big scam (over Rs billion ) only junior  bank employees have been have been made accountable (read suspended) , while top ones have been spared.  He has criticized the audacity of the present CEO of PNB - Sunil Mehta to come in front of the media and state in relaxed manner- “Bank is able. Will not allow any loss to any investor/customer””. …He should have been suspended. Court case should have been filed against him. All public sector banks have made a cruel joke. He recounts that for Vijay Mallya scam, State Bank of India (SBI) has not even suspended even one employee, forget any going to jail. He goes on to explain how PNB fraud was executed in simple language. He holds the government responsible. And ends- “Banks are ours. …Bank loss is like our loss. Have to save.”. Not surprising, Dainik  Bhaskar claims on its masthead-”You re reading country’s most trusted and Number 1 Newspaper”.

Editorials:
Hindu- “Gen of Scam”- urges for speedy investigation to resolve faith in the banking system, though also concedes- “The banker -borrower nexus has been blamed for problem in banking system for years..”
DNA- “Bank Fraud”- alleges- “It is still the tip of the iceberg”.
Asian Age- “Is huge fraud really an aberration?”
Indian Express- “A costly delay”, blames government for being late in undertaking cleaning of bank balance sheet
Business Standard- “Bank Vulnerabilities” argues for accountability imposed from government”.
Times of India- “Money for Free”. Argues for privatization of banking system,  Public sector banks in India are in  “Governance collapse”.
Pioneer-”A fraud for the ages”.  It goes on to state the obvious- “ ..Scale of fraud in PNB shows there is something deeply rotten in India’s public sector banks..The Indian public sector banking sector is in a deep state of rot & 4 years into his administration, Narendra Modi should be worried..”. The editorial ends with a pertinent question-”…But is there more bad news on the horizon?”
Tribune- “Loot with impunity” . Indeed-”Crony capitalism & risking bank frauds”. Only editorial to have pin-pointed need for bringing creamy layer in PNB to book-”… Bank frauds will never stop unless Chairman & top management are held accountable for lapses”. Opps- “lapses’ or “corruption”?
However, despite the huge scam, PNB Housing did not hesitate to place advertisements newspapers such as Financial Express, Hindus Buinessline, Hindustan Times featuring elephants, penguins, bear, monkeys. The caricatures of Mallaya, Nirav & crushed tax payer appeared in Times of India. The cartoon by Jayanto in Hindustan Times, and a large toon in Punjab Kesari on page 4. The front page of Malayama Manorma featured  cartoons with prominence - Nirav Modi fleeing on plane inscribed- Rs. 11400 cr, ahead of him is Vijay Mallaya flying in place inscribed- “9000 cr”.