Blessings were received from the President of India, Ambassadors and many others. The exhibition received high appreciation and excellent coverage from all leading TV channels and newspapers.

Causes of the revolt of 1857. Have a look what appeared in an American Magazine...CLICK here

Much has been written about the Revolt but what the first Prime Minister Pandit Jawaharlal Nehru rightly pointed out in The Discovery of India holds true even today –‘ What the Indians think about it seldom finds its way to the printed pages’. The Indian printed version in 1857 was proscribed. As a result of hard research, the exhibition, for the very first time attempts to touch upon ‘the Indian version of 1857’ that differs from the 'indian mutiny'.

A large part of the best international political cartooning does not arouse a mere ‘laughter’. Anyone who glances at them can immediately understand the complexity of the political situation in a way that thousand words cannot convey. They preserve the significant moments of history those otherwise would go unnoticed. But do all cartoons narrate the same version of Revolt of 1857? Or their difference promises to reveal an untold story?

The exhibition unraveled how the West & India remembered the Revolt of 1857. Was there any fundamental variation in their representation, especially when the Indian version was either destroyed or proscribed? Here the Indian oral tradition comes to rescue of ‘silent memory of 1857’. The exhibition re-conceptualizes the Great Revolt of 1857 by its visual treatment that draws upon various forms including

It was a fantastic voyage through visual history, both compelling and repulsive in the exploration of how memory has been organized & visually depicted across nations.​​ 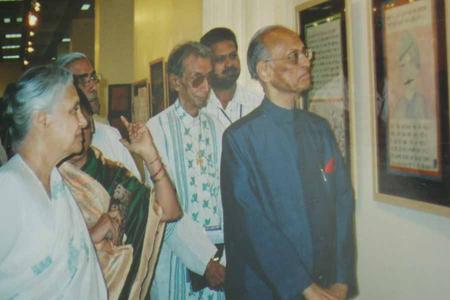