Today is Right to Information (RTI) Day, however, not many newspapers have carried any special report on this occasion. Amar Ujala informs -“Though it has been more than one decade since implementation of RTI Act, less than one percent of population have used it”. The new newspaper in Delhi -DNA which was launched yesterday, with its editor-in chief saying- “…You wont find a story where we have sold our soul to make money and sold it to you as news..” has devoted one full page to various facets of RTI Act. Among the questions, it asks- “Has the Act ushered in “transparency and accountability” in the working of every public authority?” And also highlights-”RTI ‘killed’ by weak info, says activists”.

SARCAJC conducted a random survey in Delhi Metro and found 78 percent of respondents were unaware of RTI Act 05. Though, on numerous occasions, governmental advertisements appear to educate the mainstream, not a single advertisement has appeared today, on occasion of RTI Day. Empowering more and more citizens with RTI Act not a priority? SARCAJC would like to point out the glaring hurdles faced by the main street:

(1) In majority of cases, where information is not provided within stipulated period of time by PIO, Central Information Commission (CIC) does not impose a penalty, which is in tune with RTI Act 05. In one case reviewed, CIC did not even issue a show cause notice to PIO!

(2) In one case reviewed, Central Information Commission (CIC), let off PIO without penalty, when PIO said -“sorry”, though there is no provision of apology in the entire Act!

(3) In one case reviewed, Central Information Commission (CIC) imposed penalty on Public Information Officer (PIO), it was deducted from her salary. However, later, the educational institution in Delhi, where she was working reimbursed the penalty from government funds, killing the RTI Act 15.

(4) In another case reviewed, Central Information Commission (CIC) made adversarial comments regarding the manner the RTI Act had been implemented by a educational institution and asked Principal to put all information including minutes of meeting on its website. However, the institution did not adhere and instead printed in its annual report that CIC has praised that institution! When this was brought to notice of CIC, they expressed helplessness to take action against that erring institution! What must be state of ‘education’ in that ‘educational’ institution, is not hard to guess!

(5) In another case reviewed, PIO stated records are missing, therefore information cannot be provided. However, CIC did not take any action against PIO for missing records. PIO can get away easily without penalty or by stating missing records as an excuse!

(7) In another case reviewed, the first appellate authority asked the appellant to appear in person for hearing or send some representative, though there is no provision in the RTI Act 2005.

(9) In many cases, time lag after filing complaint/appeal at CIC ranges to two years before hearing, by that time, the PIO gets changed and information can get obsolete to make a dent on accountability of public institutions. Why not increase the number of Commissioners at CIC to reduce the time lag and get a quick hearing?

(10) The profiles of Commissioners of CIC was reviewed, majority were bureaucrats, many critics view this as unfair. However, public memory is still fresh- a self proclaimed activist’s appointment as a Commissioner CIC, had first refused to take salary & perks but later retracted. He even appointed private personnel to work for him at CIC, made videos of hearing at CIC, which the RTI Act 05 does not mention/permit. Not to forget, he was soft on erring PIOs. While on the other hand, even activists, respectfully remember a Commissioner at CIC, though a bureaucrat, was not forgiving towards erring PIOs. Therefore the distinction between bureaucrats and non bureaucrats based on negative cognitive scripts should be avoided. All one needs is a person as Commissioner at CIC who will following the RTI Act 2005 in spirit with full integrity.

Right to Information Act 2005, was launched with fanfare had lost its teeth due to lackadaisical attitude of the Central Information Commission to impose penalty on erring PIOs. RTI Act 2005 is indeed a pillar of vibrant democracy, but for the main street, its just talk, no action. Anyone listening? 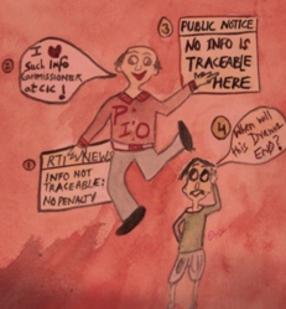 Right to Information Act (2005) in India was welcomed by the common man as it strengthens democracy and governance. It empowers the citizen of India to access the information available with government departments, public sector, local bodies, voluntary organizations substantially benefited from Government, Statutory Bodies under law of the State. It is seen as an tool to provide to secure access to information under the control of public authorities, in order to promote transparency and accountability in the working of every public authority, the constitution of a Central Information Commission and State Information Commissions and for matters connected therewith or incidental there to. For more details connect to http://rti.gov.in

Has RTI been implemented in spirit? Take a look at the number of appeals and complaints at the State Information Commission and Central Information Commission http://cic.gov.in. But here too there is no mention of recent statistics on the number of appeals/complaints. Awareness about RTI Act (2005) is still in its infant stage. Take a clue from one of the questions that appear in the RTI Awareness Quiz to “Know your RTI awareness” (http://rti.gov.in/raq.asp)

If Information is denied or not provided what can you do?

The language of this Quiz is English. Does the common man know English? How about an option of taking this Quiz in major regional languages of India?

Let’s take a look at the largest Bank in India.

State Bank of India was adjudged the Best Bank of the Year 2008 by London based ‘The Banker’ magazine of Financial Times Group. This award was decided on the basis of intensive research and analysis of financials and performance of prominent Banks, and clearly SBI emerged as the winner & Best Bank in the country. Moreover, Mr O.P. Bhatt, Chairman, State Bank of India, was conferred the “Best Executive 2008” award by financial magazine Asiamoney.

The Annual Report 2007-08, boosts that “Bank strongly believes that customer service will be the most important factor in maintaining and improving its leadership in India’s Banking Industry…All the staff of the Bank were exposed to a training programme called “Parivartan” (Transformation). The Parivartan programme has been successful in bringing about attitudinal changes in employees at most of the branches…A comprehensive analysis of customer grievances is done every quarter to identify common systemic issues that need rectification.” Take a look on the performance indicators displayed in the Annual Report 2007-08. But the performance indicators displayed in the Annual Report 2007-08 don’t take account of customer satisfaction:

However the annual report mentions Right to Information- “Structure has been put in place for handling all matters relating to RTI Act 2005.All Branch Heads (except CAG), Assistant General Manager (COO) at CAG branches, all Heads of OAD at OLROs/RBOs/ZOs/LHOs and Assistant General Manager (RTI) at Corporate Centre have been designated as Assistant Public Information Officers (ACPIOs). ....An exclusive ‘RTI Department’, has been created at Corporate Centre to handle and coordinate various issues under the Act. For the convenience of the public, the Bank has created an RTI link in its website http://sbi.co.in ….”

Is the RTI department of State Bank of India efficiently implementing the RTI Act (2005)? Take a clue from one major issue.

State Bank of India, Delhi has denied Information under RTI (Act) on the pretext that it cannot accept RTI applications where RTI fee has been paid to the Post Office. This is an excuse to deny information as State Bank of India, Mumbai has accepted RTI application where fee was paid to the Post Office, which is in line with the directions of the Central Information Commission. Take a look:

“ The application fee paid to the Post Office is not in accordance with the provisions of the RTI Act and rules” (CPIO, Local Head Office. New Delhi SBI 5/8/2008).

“..The application fees paid to Post office is not in accordance with the provisions of the RTI Act, 2005 and rules as aforesaid”(CPIO. Local Head Office. New Delhi SBI 17/12/2008).

“ The CPIO, SBI has stated that complainant sent the application through General Post office. The Bank has taken up the matter with the post office regarding the proof of payment of application fees. This process has taken some time. After receiving the confirmation from the post office the bank has processed his application ..(Mr. A.M Attar, Mumbai Vs. State Bank of India. CPIO. LHO. Mumbai . 21/2/2008)

Yes, complaint has been filed in the Central Information Commission (CIC) against the denial of information by SBI by not accepting application fees paid though the post office, but why SBI is not facilitating the spread of Right to Information? Is Anyone listening, Mr O.P. Bhatt?

Cartoon of Day: The front page of Jansatta shows a well dressed man searching at a garbage dump. He is seen justifying his presence to a sweeper- "..actually an extremely confidential file is not traceable in our office! ". The news in background reads- "confidential file reading airplane contract found on the road". Well, a friend of SARCAJC points why make a huge & cry, as it’s not uncommon for Public information officer (PIO) to come up with excuse of file not traceable & hence provide no information under RTI Act! Moreover, the much acclaimed non-bureaucratic Information Commissioner at CIC lets this PIO to go scot free. He felt nothing can be done if the file is missing! But the point is whether the file is actually missing or it is a mere excuse to deny information. If it is missing, FIR should be filed against the person responsible for the safekeeping of records and strict disciplinary action be taken against him. But who will bell the cat if Information Commissioner at CIC is not willing for reasons best known? So the result is PIO now claims large chunk of files have been eaten by termites and cited in other RTIs- information not traceable!