Shivshambu Sharma was enjoying the comfort of his bed after consuming fulfilling orange juice mixed with Saffron & Bhang (hemp), when horses of his imagination went loose. Within some time though his body lay on the bed, his imagination reached another world. But suddenly he was startled by a melodious song that made him sit up.

These musical notes were coming from rich neighbour’s house. It made him think about the meaning of the song. Kishna Who? The Prince of Brij. What about those people who will play Holi with him- his subjects. This provoked Shivshambu to think about the times when the subjects used to visit Raja’s house to play Holi and both King & subjects enjoyed together. Now, does the Raja (King) consider the happiness of its subject as his own happiness? If today Shivshambu and his friends carrying colours, picharis wish to play Holi with the Raja at his house, where should they go? The Rajas is across seven seas and they have only heard his name. Shivshambu has not seen the Rajas nor has the Raja seen Shivshambu. Never mind, Raja has sent his representative to India. Krishna was in Dwarika but for the satisfaction of Brij subjects, had sent Udhav as his representative to Brij. Why can’t Shivshambhu visit the Royal representative’s house to play Holi ?

Sun is present but there is no sunshine. Moon is present but there is no moonlight. My Lord is in town but Shivshambu cannot reach near his door, what to talk about playing Holi with him. The voice of subjects cannot reach the house of my Lordship’s house. Unlike Jahangir, Lord has not installed any bell on the main door that will ring in his bedroom so that any subject can approach him directly with his grievance. There is no hope that this will happen in future. He doesn’t understand the languages of the masses nor do subjects understand his language. He doesn’t understand the feelings of subjects not he wants to understand. And his feelings are not understood by his subjects nor there is any way to make them understand. His sight is rare. In what words should we bless the British Empire, where in our own country we are not owners of one inch of land, cannot afford to wear torn cloths nor eat a full meal. The Royal representative is busy in arranging procession of elephants and has chosen the largest elephant for himself. And he will boost about our happiness when he returns back to his home country. There are crores of people in this country who gather every evening and talk about Maharaja Vikram and other Kings who personally took steps to appraise themselves about the welfare of their subjects while roaming on road in disguise at night. People pass the time narrating tales about the justice of Akbar and intelligence of Birbal. Now no Raja in the world visits his subject’s home to inquire about their welfare. People are aware of Queen Victoria as Queen and his son is Raja. All this has made Shivshambu certain that the time has gone when the Raja & his subjects used to play Holi together. This is not in the destiny of this country. He wants to send a message to his Lord that if he sees a Brahman who wishes to play Holi with him , do remember him, even as a madman. He is pleader of voiceless subjects, who according to your wishes will not open their mouth until they are educated. 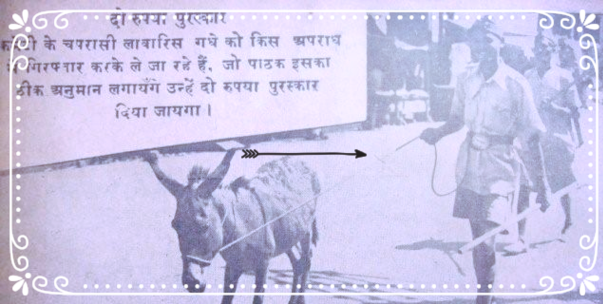 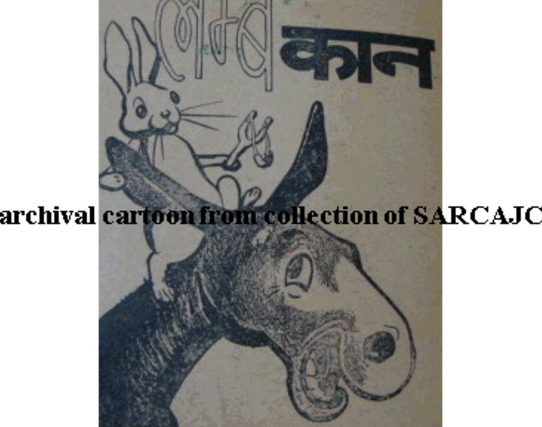 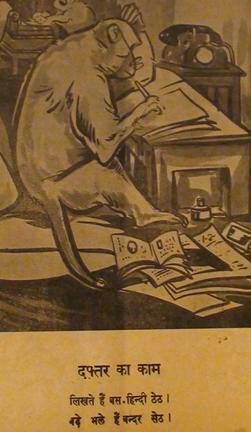 Peon of Committee has arrested abondoded donkey for which crime, those readers who will correctly guess will be given Rs. 2 as award.

Santosh Trivedi has penned down a satire in Hindi daily -Dainik Jagran-”Deer unhappy over punishment to Tiger”. He looks at the obsession of news channel over the court order and subsequent jail of bollywood actor- Salman Khan over poaching of black buck. The satire begins- “…When I reached home, after drinking a glass of water, by mistake, I opened news channel. But what! Here there was uproar. Bhaijaan was jailed for killing a deer. The experts in newsroom were not drinking water but water was flowing from their eyes- naturally. For the first time, I felt my insensitivity. I shouldn’t have drunk water while coming home…”After watching Salman obsessed news channels, Santosh Trivedi takes a nap and sees a deer in a dismal state in a dream, repenting- “..Why did I come in way of bullet of ‘holyman’? Due to my foolishness, the whole country is under distress…”(8 April 2018)

Satire of Day:...poor’s vegetable is on fire but who cares. ..They are roaming in cars and are determined to increase price of petrol. Every member of household have costly to costly cellphone..No food to eat but what to talk of style. Film heros have become our ideals. Every man is dreaming of becoming a crorepati, overnight..Mad race of commercialisation and naked dance of shamelessness. Is this a country or porch of a palace where drums are beaten...No security for anyone. The meaning of freedom has become to do what one wants. The storm of rights has forced duties backseat...Friends if possible search India...(Puran Sarma. Nai Duniya)

11 April 2011
Satire of Day: Corruption in India is an important national issue. I am scared of government offices as Japanese are scared of radiation. Entrance of common man in government office maze is impossible. At the entrance a sepoy shows way to reception room..But one can wake up who is asleep but not one who is awake..During this time one person comes to meet & gives a packet to the reception guy-“this is your medicine”. His sleep goes bust. He fills up the form and makes a pass for him in the name of joint secretary. He tells me to come again as now is time for ‘lunch break’. There nearby, Anna Hazare was on fast against corruption. I feel that where corruption is present under nose of security, there one can’t imagine corruption – inside. The cocktail of red-tapism & corruption has not just made difficult but impossible to break the talisman of entrance. Social worker is one who is far from people and closer to corruption. (Gopal Chatruvedi. Hindustan).

Satire of Day: The opportunity to become world champion in corruption has once again gone from our hands. ..The last section of competition was small and we needed to pull and concentrate. However we had to be satisfied with the fourth position...Combodia was on top, only 0.60 corruption marks away from us...We Indians have this problem, we don’t have killer instinct. That is the reason small-small countries again & again get ahead of us..No doubt, Singapore can celebrate its getting most bottom place in corruption then let it. We were not in competition for a bottom position. Then why should we envy its happiness...India has to work more hard to get to the peak of corruption. (Rajendra Sharma. Nai Duniya).

Satire of Day: Today look around everyone seems to be going gaga over leaks...Common sense of two types. First of its kind is with big people that estimates poverty, hunger, inflation and thinking of common man. The Second is with common man on which Hindi Movie Producers make movies. Understand the scene, when “Deewar’ (hindi movie) became a hit then it was said- Brother I have car, house, money what do you have and brother replied- I have mother..Well I don’t want to hurt anyone’s feelings, in today’s circumstances a comedy movie maker says-  Brother you take mother, you give me car, house and bank balance. You must be thinking how is common sense related to this, now the time has come to understand that why you are not a movie producer. See, how he thinks about public thinking and you can’t even think. This is common sense- to change with changing time...Common sense of common people tell that all those people coming to politics are no saints but businessman. This is public, knows everything, and when it knows everything there is nothing of leak. Leak comes into existence when there is something hidden. Therefore in our country there is nothing of leak this my common sense tells.”. (Murli Manohar Srivastava. Nai Duniya)

19 March 2011
Satire of Day: A satire in Rashtriya Sahara addresses Wikileaks as Brother and has splashed colours in the spirit of holi festival. Take a look-" Wah! Wikileaks brother, wah! You have cracked a good joke on this Holi. You have coloured government, opposition, all in black, it is not possible to tell who is who...Tell the truth, wikileaks brother, while sitting seven seas apart, who taught you to how to enjoy Holi so much? Is there some underground India connection?..Well Wikileaks brother you have played holi well. Now tell the whole world that during previous weeks what ever they heard, saw, wrote, printed- all was a Holi joke. ...Think about it Wikileaks brother, people on whom you have poured colour, will all come to pour colour on you, imagine your state then. So say immediately and now is all Holi joke, and does anyone mind jokes on Holi?". The creator of this satire is "Kabirdas" (ancient poet in Hindi). Point to ponder- why hide your real name, what will Wikileaks brother say?

23 February 2011
Satire of Day: Now news of corruption doesn't disturb me. My face doesn't bow down , when I get to hear that so and so politician has been caught in a scam... I dont know what has happened to me that though I am awake but I feel asleep. It seems sensitivities of heart, brain, ear, nose, mouth are dead....If price rise happens, let it be. Corruption spreads, I dont care...To tell the truth, I am fed up writing sharp criticism on corruption of politicians & behavior of government. How long?...This is the reason now I stay in full masti mood.Have told my heart. Have cooled my stomach. Government also wants that hungry should not speak as inflation is global...Get used to tolerating government with inflation. Read lesson of masti. Stay mast, then inflation & corruption will not bother...(Anshumali Rastogi. Nai Duniya)