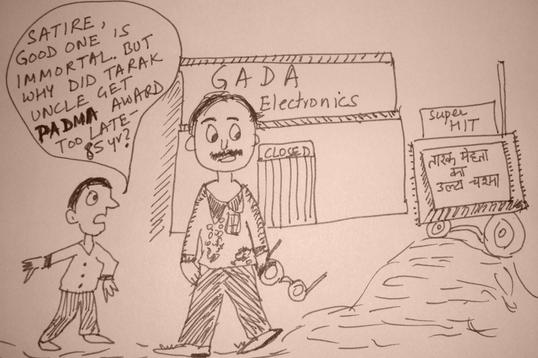 Today,  famous Indian writer, columnist, humorist - Mr. Tarak Mehta passed away in Ahmadabad, at the age of 87 years. SARCAJC pays homage to Mr. Tarak Mehta. The comedy television serial based on his writing- Tarak Mehta ka Ulta chashma’ has been extremely popular among all age groups of viewers & writings in Chitralekha magazine. He had penned down 80 books and was awarded with Padma Sri- an award  by Indian government “for distinguished service” during 2015. “The award seeks to recognize works of distinction and is given for distinguished and exceptional achievements/service in all fields of activities/disciplines”. Is it off tangent that one should  acknowledge/recognize accomplishments  of person of eminence at  prime time of writing so to encourage him/her to climb more peaks of achievements?  If lobbying the only way to get what one deserves at the prime time, then it is a sad - ‘Made in India’. (1March 2017)